(armenianweekly.com) The International Institute for Genocide and Human Rights Studies (A Division of the Zoryan Institute) recently announced the release of “Genocide Studies International” (GSI), volume 8, number 2, Fall 2014. This peer-reviewed journal, edited by the scholarly team of Maureen Hiebert, Herbert Hirsch, Roger W. Smith, and Henry Theriault, is interdisciplinary and comparative in nature. It welcomes submissions on individual case studies, thematic approaches, and policy analyses that relate to the history, causes, impact, aftermath, and all other aspects of genocide. 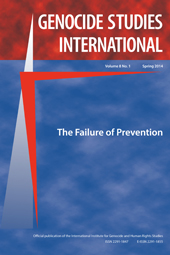 DerGhougassian’s article looks at identity politics and state policy. Through the lens of international relations theory, he examines the divide between Armenia and the global Armenian Diaspora on the question of if and how to include the Armenian Genocide on Armenia’s foreign policy agenda. The Armenian government, eager to establish diplomatic relations with Turkey for trade and economic development, has insisted on “relations without preconditions” with Ankara. On the other hand, international recognition of the Armenian Genocide and reparations have been central to diaspora activism.

Khatchik DerGhougassian is a professor of international relations at the Universidad de San Andrés in Buenos Aires, Argentina, and a visiting professor at the American University of Armenia in Yerevan. He has also served as an advisor to the assistant secretary for planning and logistics operations in the Ministry of Defense of Argentina since 2006.

Kaligian’s article examines the allegation of “Armenian rebellion” used by deniers of the Armenian Genocide as a means to justify the claims that the Ottoman Empire’s actions carried out against the Armenians were in self-defense. Kaligian currently teaches at Regis College in Worcester, Mass. He is the author of several articles on the Armenians in the late Ottoman Empire and a book titled Armenian Organization and Ideology under Ottoman Rule: 1908 – 1914. He is also the managing editor of “The Armenian Review.”

One particularly noteworthy feature of this issue is an interview from the field with Dr. Tom Catena, a courageous physician-surgeon working in the dangerous and volatile Nuba Mountains of Sudan. This interview is provided by special arrangement with Sam Totten, who traveled to the Nuba Mountains himself to bring food to the starving population and conducted the interview while there. Catena provides eye-witness information about the effects of government aerial bombings and forced famine on the civilians of the region. He reveals amazing truths about the dire situation in the Nuba Mountains, which the West continues to ignore.

The GSI issue also includes the following articles, which illustrate the breadth of coverage of this new journal: “The United Nations and Genocide Prevention: The Problem of Racial and Religious Bias” by Hannibal Travis; “Polluting the Waters: A Brief History of Anti-Communist Propaganda during the Indonesian Massacres,” by Adam Hughes Henry; and “The Role of the Netherlands in the European Framework for an International Response on Darfur during its Presidency in 2004-2005,” by Fred Grünfeld and Wessel N. Vermeulen.

Also included are two book reviews—of The Mark of Cain: Guilt and Denial in the Post-War Lives of Nazi Perpetrators, by Katharina von Kellenbach, and Overcoming Evil: Genocide, Violent Conflict, and Terrorism by Ervin Staub.

GSI’s spring issue, to be published in March 2015, will be dedicated to the Ottoman Genocides of the Armenian, Assyrian, and Greek peoples, and marks the 100th anniversary of the Armenian Genocide in April 2015.

For information on subscribing to the journal, visit http://www.utpjournals.com/Genocide-Studies-International.html or contact the International Institute for Genocide and Human Rights Studies by e-mailing admin@genocidestudies.org or calling (416) 250-9807.