In a letter to Armenia’s Embassy to Italy and the Union of Armenians of the country, L’Aquila City Mayor Massimo Cialente stated that the Council recognizes the Genocide and expresses solidarity with the Armenian people in support of historical truth and protection of human rights.

During a November 25 session of Alzira City Council, all five political parties (“Compromis”, the Socialist, People’s, “Lefts Union” and “Ciudadanos”) unanimously voted in favor of the resolution submitted by Ararat Armenian Association, viewing the first slaughter of the 20th century as genocide and condemning Turkey’s policy of denial.

During a meeting prior to the session, Mayor Diego Gomez had promised the members of the Armenian association to address the resolution to other governments and especially the Parliaments of Valencia and Spain. This meeting, which was attended by President of Ararat Armenian Association Ararat Ghukasyan and members Sergey Ghaghramanyan and Arsen Abasyan, was made possible by the latter.

Among those attending the city council session were representatives of the local Armenian community. Before the resolution was put up for a vote, President Ararat Ghukasyan briefly talked about the causes and effects of the Armenian Genocide, the historic significance of the day, as well as the need and importance for all state structures to recognize the crime that Turkey committed. Afterwards, Ghukasyan donated the Forget-Me-Not badge symbolizing the 100th year anniversary of the Armenian Genocide to Diego Gomez, urging him to never forget and to continue the struggle until its logical termination.

After the vote, first-year student of Yerevan Komitas State Conservatory and violinist Edmond Hovhannisyan performed Komitas’s “Krunk” for the city council members and the attendees and received warm rounds of applause.

And so, Alzira became the 12th city of the Kingdom of Spain to recognize the Armenian Genocide. Who’s next?

Marking the anniversary of 100 years since the Armenian Genocide, the European Green Party expresses its’ solidarity with the Armenian people and calls for action towards an historical rectification, bilateral reconciliation, and firm action against hatred and all forms of violence. 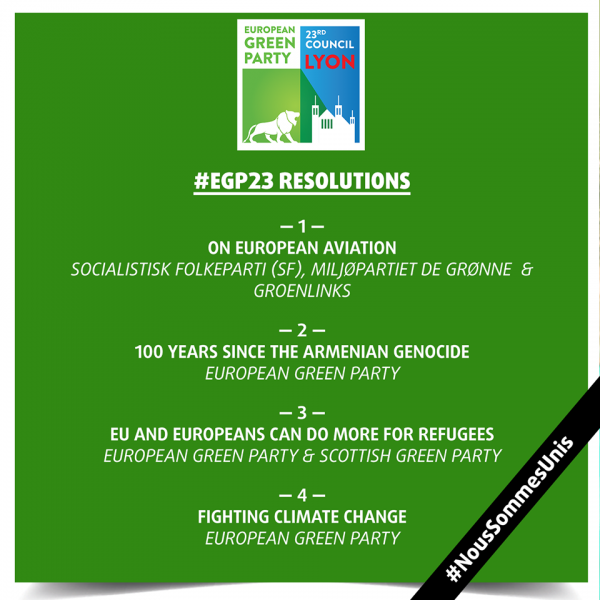 We acknowledge that the bloodshed that was conducted by the Ottoman state against the Armenian people, during 1915-1923, constituted a genocide according to the meaning of the convention on the prevention and the punishment of crimes of genocide, adopted by the UN General Assembly on 9 December 1948. The structural and well planned violence conducted by the Ottoman state brought death to an estimated 1.5 million ethnic Armenians. We want to express additional mourning to the destruction of whole communities, cultural heritage and interethnic society committed at the time. This is about not forgetting and commemorating the victims, Assyrian and Pontiac Greeks, numbering over a million fallen. We must not neglect that this tragic campaign included severe torture, rape, and destruction of families, communities’ structures and displacement.

We also acknowledge the tacit complacency as well as support that states that are now Member States of the EU have given to the Ottoman Empire. We especially recognize that the German Kaiserreich shared responsibility for the genocide. As a close military ally of the Ottoman Empire, it knew about the massacres but decided not to intervene and even prevented related information from spreading in the public.

Denial of the Genocide by the Turkish state and prorogation of recognition by other states, not only keeps the Armenian community further from historical settlement and having their own history, but also adversely affects true reconciliation between Turkey and Armenia and moreover weakens actions against new waves of violence.

Henceforth we commend the Turkish citizens who are strongly and fearlessly committed to the recognition of the Armenian genocide and who stand up to the State propaganda and censorship.

The EGP urges the EU Member states and the European states that have not yet done so, to open the political process to recognise and condemn the Genocide, followed by the respective Act.

-­‐ We deem that it’s of the utmost importance that the Turkish government recognises the Genocide and conducts acts of moral and historical rehabilitation towards the Armenians.
-­‐ We call upon the Government of Turkey to offer its official apologies to the Armenian state and diaspora.
-­‐ We call upon the Government of Turkey to immediately abolish Article 301 of the Turkish Penal Code that among other things
censors political and public debate on the genocide issue and to acquit all those who were imprisoned or fined under this article.
-­‐ Seeing it as an investment in a common future and cooperation, we call upon the Turkish government and civil society to re-evaluate historical and cultural narratives and thoroughly eliminate hatred from them.
-­‐ Additionally, the Turkish Government should take the necessary steps to open all archives and invest in opportunities for historians, academics and researchers to engage in a transparent debate and come to terms with its past.
-­‐ We urge the Government of Turkey to respect and include the Armenian cultural heritage within State borders within Acts of Protection and Development of Cultural Heritage.
-­‐ Finally, the current regime in Turkey must admit that failing to acknowledge the Armenian Genocide and invest in reconciliation until today gave cause to rhetoric of violence and fear and gave legitimacy to perpetrators
-­‐ We urge governments of both countries to establish diplomatic relations without any precondition with utmost priority of opening shared border.
-­‐ We urge the German government to recognize unequivocally the responsibility that the German Kaiserreich carried with regard to the Armenian genocide and to provide substantial financial and other support for efforts to research and commemorate the
Armenian genocide. We urge the governments of Germany and of all EU member states to anchor the history of the Armenian genocide both in their respective national and in the European culture of remembrance.

As Europeans and as Greens, we believe that everyone’s right to their own history, culture and identity needs to be respected. The European Greens acknowledge the Armenian genocide and pay due respect to its victims as a first step towards historical reparation.